Valanice and her appearances throughout the games. Valanice's wardrobe is so large, it was not kept in the royal family's quarters. In fact, Valanice's summer wardrobe alone took up a set of apartments down the hall from their quarters that had once housed royal nieces and nephews and cousins of all sorts in long-ago times when the royal family had been larger.[1]

In The Floating Castle she is describe as having dark hair smoothed back, and clasped behind her head. In KOS, she had light brown hair that fell in ringlets to her waist, when she unbound her hair. Her hair was constrained by a golden net. A silken rose-colored dress trimmed in gold thread covered her from shoulders to ankles. Her feet were wrapped in slippers dyed an even darker rose to match the dress.[2] at another point she wears an outfit matching the one Graham was wearing; woolen cloak with royal sigil, heavy jerkin, and pants. She also wore leather boots, a fur hat, and an overcloak. Hers was a pale green. It complimented her 'light brown hair'.[3] In See No Weevil she was dressed in a split skirt for traveling, her auburn hair had been bound up under a netting of golden silk.

Valanice wears a number of dresses throughout the series, from a light blue/cyan dress in her first appearance, ot her white wedding dress, to blue/dark blue dresses in KQ3-5 (and part of 6 and VGA closeup in the game). She also wears a purple dress in KQ6's intro, and SVGA close-up in the enhanced version of the game. She wears turquoise dress in KQ7 (probably a call back to her more 'cyan' blue-green dress in KQ2).

In King's Quest: Mask of Eternity, a painting of Valanice appears in Castle Daventry. In it she wears a green dress. Valanice's hair varies throughout the games between light reddish-brown to red.

Painting of Valanice from KQ8. 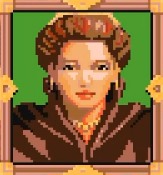 Valanice's sprite as she appears in King's Quest VI

Valanice's outfits from boxart and other paintings. 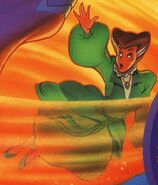