Start a Wiki
Unicorns are, in appearance, stunning purebred horses with one odd feature: a single, pointed horn adorning the top of the creature's head. Unicorns by nature are shy creatures, but they are also very intelligent and are good judges of character.

Unicorns are shy and bashful beasts, magical in both fact and appearance.[1] These are thought by many to be the rarest and most magical of beasts. The unicorn has the head and body of a horse, but with a long, sharp, twisted horn in the middle of its forehead. They are very shy beasts, intelligent, and inhabiting open woodlands. It is said that only a pure virgin maiden may touch or ride the fabulous beast, and that none can ever tame it. For these reasons it is a symbol of freedom and purity. The unicorn's horn is held to have magical properties, and people have hunted them for millenia to obtain the horns. This is perhaps the main reason they are so rare today.[2]

Rosella was given the task by Lolotte of bringing a unicorn to her--something she obviously could not do for herself. Rosella did this by shooting the magic beast with one of Cupid's arrows of love, and then placing a Golden Bridle (which she had found on the Shipwreck Island) about its neck. After she had defeated the evil fairy, Rosella freed the unicorn from Lolotte's stable.[3] Despite Rosella's noble intentions, the unicorn avoided the princess during the remainder of her time in Tamir. For bringing the unicorn to Lolotte in the first place, the beast had fallen out of its enchanted love and no longer trusted Rosella.

A white unicorn living in the kingdom of Daventry was turned into an Ugly beast by a witch, when its horn was stolen during the cataclysm. Connor was able to restore the unicorn to its normal form, after finding the horn.

In the Ancient Ones language the unicorn is the animal that represents the letter G. 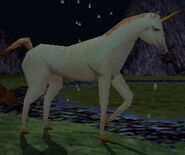 Unicorns are first mentioned in the second version of the KQ manual. "A long, long time ago when unicorns still roamed the forests...", and an image of a white cloud-like unicorn can be seen in the illuminated 'A'.

Imagery based on the boxaft from King's Quest IV: The Perils Of Rosella appears on a tapestry in King's Quest Chapter I: A Knight to Remember (and later chapters), however the unicorn from the original artwork has been modified into just a horse, the horn removed from the artwork.

Retrieved from "https://kingsquest.fandom.com/wiki/Unicorn?oldid=105704"
Community content is available under CC-BY-SA unless otherwise noted.