Tanalore is a large continent on the world of Daventry, and the name of a city located there. The lands of Llewdor and Tamir are located on the continent.

To the north and west of Daventry, across the Western Sea, lies the great continent of Tanalore. An eternal city of the same name is said to exist somewhere there, touching all of the realities of creation; but none has ever found it--or returned after having done so. The great middle of this continent is covered with deserts, swamps, mountains taller and steeper than those of Daventry.

In the eastern part of Tanalore there is the land of Llewdor where Manannan once ruled. On the far western side of Tanalore lies the land of Tamir, the last of the five (sometimes four) great countries of the world.[2]

Tanalore was named after the lore of the herb Tana which leaves will bring mummies back to life or rather undeath. Which suggests that the city itself may be located in the ancient land of Aegypt. Thus was home to the Aegyptians.

The coasts of Tanalore appear be surrounded by a number of islands. Little information is known of these islands with exception of Fairy Island and the Desert Island.

According to the King's Quest Companion, one of Tanalore's two countries Tamir is the last great country of the world, following Daventry, Serenia, Kolyma and Llewdor in that order. The Green Isles is not considered part of that category, perhaps due to it's remoteness and the fact it is a very small lands of islands, as opposed to large lands taking up whole continents.

Tanalore appears to be named after the Tana leaves mentioned in the Universal Mummy movies. The term 'Tana' is likely inspired by the Lake Tana, the source of the Blue Nile in Ethiopia, one of the major tributaries that leads into the Nile.

There is a village of Tana Lore in Central Sulawesi an island in Indonesia.

Tanalore has apparently been used by or inspired RPG fan fiction.[3] 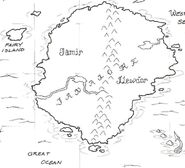 (KQ3 era)
Add a photo to this gallery

Retrieved from "https://kingsquest.fandom.com/wiki/Tanalore?oldid=104436"
Community content is available under CC-BY-SA unless otherwise noted.