The Royal Family (aka Royal House of Daventry[1]) is the formal name for the rulers of Kingdom of Daventry, the first family of Daventry. The current Royal Family is King Graham and his family, the Graham Family.

It seems, that the King of Daventry and his family are forever charged (although some might say cursed) to play a grave and crucial and essential role in the very existence of the universe of Daventry. King Graham and his family are for the side of Good and Manannan and all of his family are on the side of Evil. Neither side chose to be be what they are nor understand why they were chosen. The final winner will determine the course of the world until the next crisis arrives, and the fight is renewed again with new players.[2]

The heir during succession of rule is usually the first born son (or daughter) of reigning king. When there is no direct heir, it maybe passed onto the wife, or other close relatives of the king. When there is no close or direct relatives as was the case with the previous King Edward, then the king chooses a suitable heir from the noble families (knights or others). These maybe distantly related or not. When a king dies with no wife, or children through mistakes or other means, dynasties can change[3].

Note: At beginning of KQ7 Rosella has many suitors she is not interested in. At end of KQ7 Rosella isn't yet ready to jump into marriage, she decides to take things slow, but allows Edgar to court her. However, it is said that Rosella may be impetuous, but she is no fool. She would marry no man before her time, and she knows near nothing of Edgar. Apparently following the events of KQ8, Rosella would meet Connor upon his return and be smitten with him, and have to decide between Edgar and him.

Other Nephews, Nieces, and CousinsEdit

Graham thinks the above theory that he represents the forces of good is unlikely.

"Yuk!" is the royal family's favorite word of disgust.[4]

It seems that according to the Kingdom of Sorrow that Graham's family is distantly related to Edward's, as it links the 'royal family' which he is a part of together with the older 'royal family'. The books suggests distant cousins, nieces, nephews etc. Part of the castle had a set of apartments down the hall had housed royal nieces and nephews and cousins when the royal family had been larger.[5] Although this would seem to contradict The King's Appeal which states that had no relatives. But it could mean relatives close enough in proximity to blood to follow typical hereditary order of succession (firstborn son and/or daughter) .[6] See Order of succession, and below.

Another decription in Kingdom of Sorrow holds the implication that Graham first generation to immigrate and become a citizen of Daventry, and that it was possibly that Graham came to Daventry after his youthful travels. This is a bit different than the Companion or Hoyle 1 accounts which link his family back to Daventry by at least two generations (or KQ1SMS which also suggests he grew up in Daventry). However it can still be interpreted to fit with the other lore if he just means that his family only goes back a few generations, rather than many. But as mentioned, on the other hand the same book suggests the "royal family" which he is a part used to be much larger in days before Edward, suggesting some distant relation to Edward. Still possible (ignoring the sources stating he was born and raised in Daventry), assuming Edward's ancestors married into nearby lands, and Graham is related to one of those families (but this article still goes with main series accounts and Companion's more specific information concerning Graham's heritage).

In Kingdom of Sorrow its suggested that Graham is not of 'noble' birth, or at least not of royalty/'born to the king's station' (though other sources confirm he is in fact of the nobility, but not necessarily royal lineage). This is also nodded to in See No Weevil, that he not of royalty. But on the other hand the books suggests his family related to the royal family at least distantly, as mentioned above. 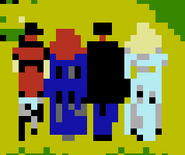 The idea of dynasties appears in Romancing the Throne: From the Chronicles of Daventry, Part II, though it doesn't specifically state that Graham and Edward are of seperate dynasties, only that Graham risked ending his dynasty if he made a mistake. Graham was considered 'heir' to Edward, if he was given 'adopted' status is not clear (though he is described as 'son' by King Edward).

While 'dynasties' designate alternate 'families, stock, or group', they may still be related distantly by blood. This is due to the fact that much of the royal and noble families intermarried with each other and with the families of other nations to create alliances, pacts and treaties. As was the case with the British monarchy in which the current house of Windsor can still trace its heritage back through the various dynasties including Hanover, Saxe-Coburg-Gotha, Stuart, Tudors, Lancaster and York, Plantagenet, Angevin, and Normandy, all the way back to Albert the Great (assuming there were no 'pretenders' at any point in between). This means while they might not be close enough to consider themselves relatives, they may still share proximity of blood by distant ancestors.

What this means is that Graham could still be distantly related Edward by blood, but not close enough to be considered a 'relative', allowing for the idea that Graham belongs to the same 'royal family' line, but not actually close relative, and a separate dynasty.

Retrieved from "https://kingsquest.fandom.com/wiki/Royal_Family?oldid=105803"
Community content is available under CC-BY-SA unless otherwise noted.