Rosella has worn several different outfits throughout the games.

Rosella's outfit in KQ3 is a short-sleeved white dress with a blue trimming along base that is long and covers her feet. There may be red trimming on her sleeves or this may just be shading on her skin. She is wearing a blue necklace perhaps of beads (KQ3). 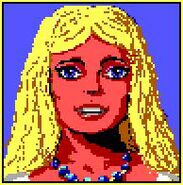 Rosella's closeup while talking with Genesta (shows beads in detail).

In KQ4 she starts (and ends) the game wearing an all-white dress with long light blue sleeves. The dress is trimmed with a strip of dark blue where the shoulders and sleeves meet and frilly white cuffs. The dress also has a dark blue strap tied around her waist which hangs down the front of her dress (this is missing in some scenes), and a necklace of blue beads. She wears dark blue slippers (KQ4).

Closeup from the intro

In the scenes in Graham's bedroom a light blue bit of cloth can be seen covering her chest beneath the dress.

In the bad ending (a forced marriage to Edgar), she can be seen wearing a black dress with long purple sleeves (with gold trimming) and crimson lining. She wears a ring of flowers in her hair.

In KQ5 her sprite wears a white dress similar to her dress in KQ4, all white, though short-sleeved, with dark blue trimming on the sleeves, tied up with a dark blue ribbon, and a blue necklace.
RosellaKQ5spriteEGA.png

In a closeup, Rosella wears a light blue dress with tied up with a dark blue ribbon, and a gold circlet around her neck. There is a v-line around her breasts edged in blue. She wore a similar outfit to her twin's wedding in King's Quest 6.

In the EGA version it appears to be a white dress with a blue ribbon, similar to what she wore in KQ4. The neckline is different design. She appears to be wearing a black choker with a white stone.

Rosella wears light blue dress with black trimming on the edges, and a black strap around her waist.

The black trimming is easier to distinguish.

Hi-res image from the CD version. 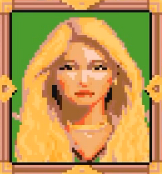 In KQ7 she wears a blue silk dress with a white high collar. She also wears a black choker decorated with a white stone and and a black bodice. The dress is shorter than her previous ones, ending above the ankle.

Shows her hairstyle and her black necklace with white element (buckle or stone?) in detail. 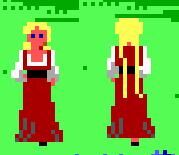 When Genesta enchants her to look like a Tamir peasant girl, the red peasant dress is ankle-length and empire-waisted. A long-sleeved white blouse underneath. Rosella's hair is put up into two ponytails or braids.
RosellaKQ4appleprincess.png
Rosellaamiga.png
From the amiga version.
RosellaspriteKQ6amiga.png
Rosella's full dress as it appears in KQ6 for the Amiga.

Other appearances and transformations

Rosella's portrait from Hoyle 1, based on her portrait in KQ4. She appears to have shorter hair or wearing fishnetting (keeping it in place). She has white collar with blue edging at the base of her neck (although this the blue beads from KQ4 in lower resolution).

Rosella's portrait in Hoyle 3: Rosella wears an elaborate tiara. She has a light blue dress on with a dark blue trimming around the v-shaped neckline. She appears to have blush on her cheeks and purple eyeliner.

Rosella's wears similar clothing and hairstyle as she does in KQ4, though the dress is pink.

Rosella's cameo from Larry 2. She wears a pink dress with a white blouse underneath.

From an ancient sarcophagus, contains an excerpt of the Rosella Stone in ancient Egyptian, "She of the golden hair" with The Picture next to it.

Rosella cooked by the dragon (KQ3).

Rosella transformed into a troll. The blue dress is magically shortened.

Rosella has blue panties under her dress.

At one point during the game she wears a black robe to disguise herself as Lady Tsepish.

In artwork she has worn several different outfits as well.

Rosella from the cover of King's Quest Companion, 1st Edition. 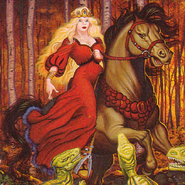 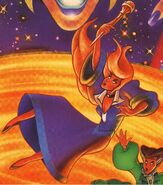 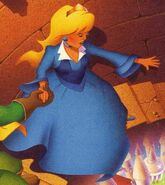 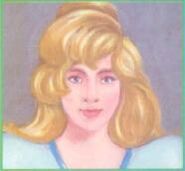 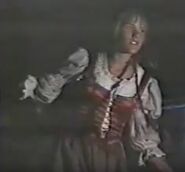 Other outfits described in stories[]

Rosella has warn many different outfits in the novels. In See No Weevil for example she wears 1-2 for each day the story takes place. About 9-15 outfits. Each one is described in detail.

She also wore a gold locket on a long black cord.

She wears a split skirt when she decides to ride on a saddle. If she does have her split skirt she rides side-saddle instead.

Rosella felt many of her dresses in her wardrobe were too much like little girl's dresses. Her mother gave her a couple of dresses from her own wardrobe because she was becoming a young lady and need a lady’s wardrobe.

The blue dress Rosella was to have worn to the wedding, It was not one of Rosella's favorites. The pearls helped some, but the dress and the skirt of the dress, still looked lacy and frilly, in all the wrong ways. It looked like a little girl’s dress.

She wears one of her mothers dresses: In the wardrobe was an emerald—green overdress with gold-thread piping and delicate lace at the waist, neck. and cuffs. A cream—colored underdress hung next to it. Next to that was a silken cream—colored belt. It was a dress for a queen, not a young princess. After putting on that dress she also had her hair combed and fastened it under a golden net.