The Land of the Green Isles (aka Green Isles, The Isles[2], or the Land[3][4][5]) is the name of a island chain (consisting of the land and a kingdom) on the World of Daventry.

An ancient and peaceful kingdom, the Land of the Green Isles has long been the subject of much debate as to whether the land is a reality or if it is just a work of a great imagination. Until recently, the land was largely dismissed as being myth. The land is a place of vague boundaries--as if islands come and go.[6] The Land of the Green isles is many separate places, kingdoms and princedoms, and priestly covens, and more. Most of times they live in harmony, but grievances and poor tempers are not unknown. Covering many miles of sea, the many, and ever-changing islands exist close by the edge of the universe. In a world where those living there continually reinvent themselves, the Green Isles is where re-creation is noticed most. Islands come and go; some transmogrify from wood to jungle to mountain to sea. Others appear and then vanish daily. Their numbers change like the waves on the beach, building up and then retreating. Some days or months or years there are more; other times, fewer. Perhaps four, perhaps five islands, have attained enough constancy to be accepted as more or less permanent parts of the realm. Each of these isles has its own ruler, but all pledge fealty to the rulers of the realm's largest portion, the Isle of the Crown.KQC 38

A fifth island sometimes stays around long enough to be counted as a semi-permanent member of the insular community, the Isle of the Mists. It is visible and visitable only when the Druids can cast and maintain an earth spell to blow away the island's eternal fog.KQC 40. The island's druids maintain the tropical climate in the islands, making it an eternal springtime.[7]

One more island of note in the chain is the Isle of the Dead, the location of the Realm of the Dead. Its cold black mountains are sometimes seen on the horizon from other islands, though few have confirmed its existence. It is not part of the kingdom, although it is part of the island chain.KQC 40 The Realm itself, is is not actually part of the world, but the next.

There are other isles and islets and grassy rocks which make up the Land of the Green isles but are of little interest.KQC 40

The waters about the Green isles are treacherous in the extreme, and it is the reefs and currents and eternal fogs which keep the realm secure from the intrusions of the rest of Daventry--these, and the great storms which local legend claims to be the artifact of a great protective spell once cast to defeat all intruders.[8]

Rocky Shoals and Dangerous Currents pose danger to most ships that attempt to travel to the islands. The islands have always been surrounded by terrible eddies and currents that make seagoing nearly impossible. The Green Isles lies near the Edge of the World, and the deadly currents are the result of a magnetism that sucks life from one world to the next. Dangerous currents and whirlpools can materialize and suck at a ship at any given moment, pulling it under. Few people survive ship wrecks around the islands, and few are lucky to make it to shore safely. Most are pulled under to their doom. It is pure fate that some survive, washing up on the shore of one of the other islands such as the Isle of the Crown. Only the family that runs the ferry between the islands knows the secret to navigating the islands, and have run the ferry for generations.

Not only is the water dangerous, it is also deceptive. The oceans appear calm, but a dimpling pattern to the surface indicates a strong undertow, and shifting sand is moved by the current. Underwater currents tug at the legs of those who are foolish enough to walk out into the water. Within a few feet the underwater tow become too strong, and the ground too loose to safely walk further. It will ferociously pull a person's legs out from under them, and they are dragged out out to sea, and then currents around the island pull them under. It is impossible to swim in the waters due to the dangerous under currents.

The Green Islanders are fond of saying that the impassable currents in the seas around the kingdom are there as a warning - to keep all ships from sailing further east. For it is believed that within a day's sail in that direction a ship strong enough and foolhardy enough to survive the tempest seas would encounter the Edge of the World.

The kingdom's location so far from the rest of the known world, combined with the dangers of the surrounding inhospitable sea, have effectively isolated it from the influence of other lands.

The kingdom is currently ruled by King Alexander and Queen Cassima, and was very recently ruled by King Caliphim and Queen Allaria (Cassima's parents) and the Green Isles have had many rulers over the centuries, and many Green Islanders believe the Royal Family of the Green Isles, which the citizens call "the Crown" to have existed as long as the kingdom has. But there is evidence which points to an even earlier kingdom, at least on one isle.

When Derek Karlavaegen attempted to hide the existence of the islands, he marked the location as 'Here Abide Monsters' (which is technically true as the area is known for sea monsters).

It is a warm and sunny place, with women so beautiful to make jewels weep.[9] In fact it is said that the women of the Green Isles are the fairest in the entire multiverse.[10]

The chain is made up of volcanic islands.

The islands are considered to be in the tropics[12], with a tropical sun, and tropical breezes. Although this is technically controlled by the druids. The islands seem to be geographically north of the actual tropics.</nowiki>

During a three month journey Alexander traveled to the islands.[13].

Of course Derek's account doesn't figure in all the time lost, possibly traveling in circles after having lost directions. But it would seem that it would have taken him two weeks to get to Serenia from Llewdor at least. However, other accounts seem to suggest that it only takes under a day or two to reach Daventry form Port Bruce. Alexander took a day to visit Derek in Llewdor, and return home, while his ship was being prepared for the journey to the Green Isles.

This might suggest to suggest a different scale for the world between KQ3/KQ Companion, and that being described in KQ6/Guidebook.

However, of course it could also mean that weather, wind, magnetic anomalies, changes of currents and other factors could determine how fast or slow a ship travels between continents. Also the water between Daventry and the Green Isles is also described as having magical qualities as well.

One final clue involves the surviving sailors from Alexander's ship who returned to Daventry to tell Alexander's family he had been lost. They had made it back to Daventry within a few days to a week from the time the ship went down (once he ended up in the Green Isles, Alex adventure took place over the course of one to three days, and another week from the time he defeated Alhazred to the wedding).

Graham tells King Alexander that when they return home he will let the crew know that they had been successful. Which confirms they had already made it back home within that week.[14]

This begs the question without a reliable ship how did they return to Daventry so quickly if the distance between both locations is truly vast. Instead this would suggest that in reality the continents, and Green Isles are likely very close together, and there are other factors that cause travel to be longer or shorter for passengers on ships.

King's Questions may also suggest that in good weather, and due to magic it might not take long to travel between Green Isles and Daventry as well. Able to cross over in the time it takes for the Captain to finish a rousing quiz game with his passengers. 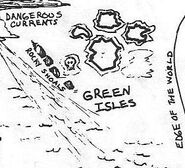 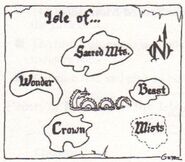 KQ5 for the NES refers to the land as the 'Land of the Green Isles'.

The Welsh Fairy Book contains a fairy tale/myth called The Green Isles of the Ocean, which discusses the land of the same name.

The Arabian Nights story in which Aladdin and Ali Baba's stories come in also contains a story about the young king of the Black Isles. This is a fun connection because the Green Isles' princess is Cassima, which is the female version of the name Cassim who is Ali Baba's brother.

The Isle of the Beast maybe seen behind the castle, to the northeast (although the narrator isn't sure). A vista of mountains and pine trees can be seen to right of the castle, but its impossible to tell if its part of the Isle of the Crown or another island.

In early development the location of the Green Isles was to be the 'other side of the world', see KQ6 development.

Land of the Green Isles (unofficial)Edit

Retrieved from "https://kingsquest.fandom.com/wiki/Land_of_the_Green_Isles?oldid=107327"
Community content is available under CC-BY-SA unless otherwise noted.