In the new King's Quest Game Series universe, artwork has been shown that shows Graham at various ages of his life, growing older. Starting young, and growing a beard later in his life, until he has a beard like King Edward's.

The first game in the new series shows Graham at two different ages in his teens (16, based on dates given in Chapter 3), and his twenties (21 in the prologue going by dates in chapter 3, and at least 21 in Chapter 2). Note: this is a change to earlier timelines (in which some sources say he was 19 when he went on the quest), and this and several details clearly put this this backstory into alternate universe territory (the new King's Quest has its own seperate 'canon').

In his twenties, before he became king, Graham wears a red cloak and mantle with a circular red clasp with some kind of marking on it (reminiscent of the cape seen on the KQ5 boxart), the cape has a edging of lighter red cloth along the bottom. He wears brownish leather and/or brass armor, wrist guards, and greaves with stitching down his sides, and under his wrists. Various pouches can be seen along a leather belt on the armor. He has blue tights on over his legs. He has a bluefish grey jerkin under the armor. His sabetons appear to be made of strips of iron or steel and leather or brass. As such several elements of his uniform appear to be closer to what a squire or knight would be known to wear. The Adventurer's cap appears to made of two parts, dark blue material around the sides, and lighter grey on the cap part, the feather is of deep red. Graham is portrayed with blue eyes, and dark greyish hair. His chin has a bit of a stubble or slight goatee growing.

His 30s image from chapter III also shows him with stubble on his chin.

This new design shares some similarities to the wardrobe seen on the cover of Kingdom of Sorrow (with the 'tans' and different colored shirt underneath (or different colored sleeves)), or the Graham on the cover of The King's Quest Companion 2nd Edition (where Graham is shown fighting a dragon in a crystal ball), or perhaps even elements oft he graham appearing in various editions of the Companion in the King's Quest 1 and 2 novelizations (in which Graham appears to have a light leather armor vest/sleeveless jerkin over a shirt) in particular the picture of Graham looking at himself with a crown on his head (with almost the exact same crown design). Obviously the cape shares some similarities to the King's Quest for the SMS box art, and the boxart for King's Quest V, and cover of Kingdom of Sorrow.

Graham in his 20s

Graham in his 30s

Graham in his 50s 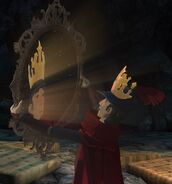 20s Graham forsees himself as king in Chapter 1 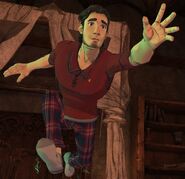 Grahamold8bit.png
Add a photo to this gallery 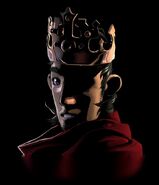 Graham in his 30s

Graham in his 50s

Graham, drawn over the 2006 King's Quest Collection box, to look more like an Older Graham in King's Quest (2015) 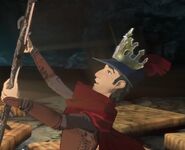 Add a photo to this gallery
Retrieved from "https://kingsquest.fandom.com/wiki/Graham%27s_wardrobe_(KQGS)?oldid=107405"
Community content is available under CC-BY-SA unless otherwise noted.