Alexander's various clothes from the various games, and artwork.

In KQ3, in most versions he wears a magenta jerkin (or pink) with cyan sleeves (elbow length) (or at least a vest with jerkin unerneath), cyan pants, and black boots and belt. In Amiga and Dos Composite motes he wears orange. In KQ4 the sleeves are crenelated (short sleeved, midway between shoulder and the elbow).

In KQ5 he wore a blue shirt, grey trousers, brown leather belt, and black boots. The outfit was a similar style to his father's adventuring outfit. In KQ5 NES he wears three different outfits. The first seen in the crystal ball, he wears a blue shirt, and greyish pants (though closeups show him with a red shirt on). Later on he wears almost the same clothes as his father, red shirt, and dark blue pants. His third outfit in the game appears to be a black cape/cloak.

Note: Interesting detail in KQ5SCI versions Alex stands alone while Graham stands with his arms around both his wife and daughter while heading back to the castle. In the KQ5NES, Alexander is between his sister, and his mother (Graham is on the left next to his mother), and they all appear to link arms.

In one instance on KQ6 Amiga Alexander is shown to wear a light blue tunic with yellow slits and green pants. Due to use of palette swapping in KQ6 Amiga, Alexander has several varieties of costuming depending on the scene. While on many screens he still wears green tunic with yellow stripes (albeit a darker shade of green), in some screens he appears to wear an olive green tunic with white stripes, and in others white, tan or red scarfs. Sometimes the bottom edge of his jerkin appears to have a line of red trimming underneath. 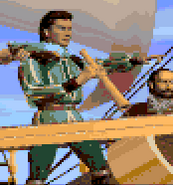 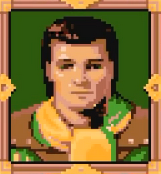 Other Appearances and transformations[]

Alexander transformed into a Warthog

In artwork he has worn several variations as well. On the cover of KQ3 he is shown wearing a ragged and torn blue shirt. On the cover for KQ6, he wears outfit similar to in-game except that one of his scarfs is salmon colored, and blue trousers. The front of his shirt is solid green, and only his arms have the yellow piping. On the cover of King's Quest Collection, he wore a green shirt (with green cloth over-tunic), green pants, brown leather gloves and boots, and a yellow scarf around his neck. In some of the artwork he has a mustache, in at least one of the images from the King's Quest Companion. Also depending on the Companon artwork he wears some kind of mantle or cape, depending on the image over his shoulders and shirt (the image from the 3rd edition somewhat resembles his later clothes seen in the KQ6 related artwork). On the cover of The Floating Castle he wore an outfit similar to the one from KQ6, with the edition of a red cape (it has many vertical yellow stripes). In the book he wears a couple of outfits, simple and comfortable clothes; a full shirt of white linen, dark trousers, a sleeveless jerkin of buff leather, and soft shoes.[1] Later he wore: 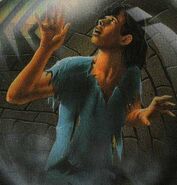 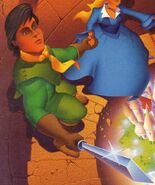 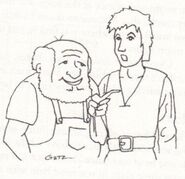 Alexander wears a few different things in The Floating Castle;

Alexander carried a short sword and a lightweight shirt of silvered mail. He wore a set of sturdy clothes, a coat, flexible boots, and a dark black cloak.[2]

It is said that Alexander sometimes converts his somewhat tattered cloak into a pack to contain all the things he collects on his quests.[3]