Start a Wiki
The Adventurer's Cap is Graham's iconic choice of clothing. He has worn it on all of his adventures, and even tried to pass it onto his children to prove they were adventurer's as well.

Graham keeps the four leaf clover he discovered on his first major quest inside the hat for good luck, and it's possibly one of the things that adds to his success. As such the cap might be unofficial fourth Great Treasure of Daventry.

Whenever Graham is wearing the crown, the hat can almost always be found near him either hanging from a hook on the wall, or sitting on a nearby table.

In common terms this hat is often known as the Robin Hood Hat (as it was made famous in Douglas Fairbanks and Errol Flynn Robin Hood films, and other Robin Hood films), it is based on a renaissance hat sometimes called early English a bycoket or in French chapel à bec. It is sometimes modernly referred to as a woodsman hat or hunter's hat, and often associated with foresters, woodsman, rangers, scouts, hunters, and archers in modern fantasy literature.[1]

Despite King Graham picking it up from a wall hook when he tosses it in KQ3, he instead picks it up from a table at the beginning of KQ4 to toss it.

Sierra uses the hat in much of its marketing. Using terms as 'putting on your Adventurer's Cap' (meaning to take up a new adventure), Hold onto your Adventurer's Cap (be ready to be amazed) or passing the 'Adventure's cap/hat' (to pass the adventuring onto the next generation), and many other variations. During the 2014 Game Awards Roberta Williams passed on the Adventurer's cap both physically and symbolically to the The Odd Gentlemen. As such the Adventurer's cap was and still be seen seen in some of the logos and promotional material concerning King's Quest games.

Roberta Williams Passes the Cap to The Odd Gentlemen 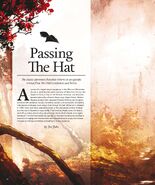 Passing the Hat[2] Uses new variation of the phrase "Dust off your blue adventuring cap and put on Graham's boots once again..."
Add a photo to this gallery

The "Passing of the Cap" was made famous in KQ3, and the start of KQ4, and is likely the start of much of this trope. In KQ9 Trailer it shows Graham put his cap on, just before he chooses to enter the Ancient Well to suggest he is ready to get down to business. Though 'Putting on the Adventure's Cap' goes back to the intro of King's Quest 2.

The Adventurer's Cap is to Graham what the Fedora is to Indiana Jones, or the Red Hat (with an M) is to Mario.

Retrieved from "https://kingsquest.fandom.com/wiki/Adventurer%27s_Cap?oldid=103440"
Community content is available under CC-BY-SA unless otherwise noted.